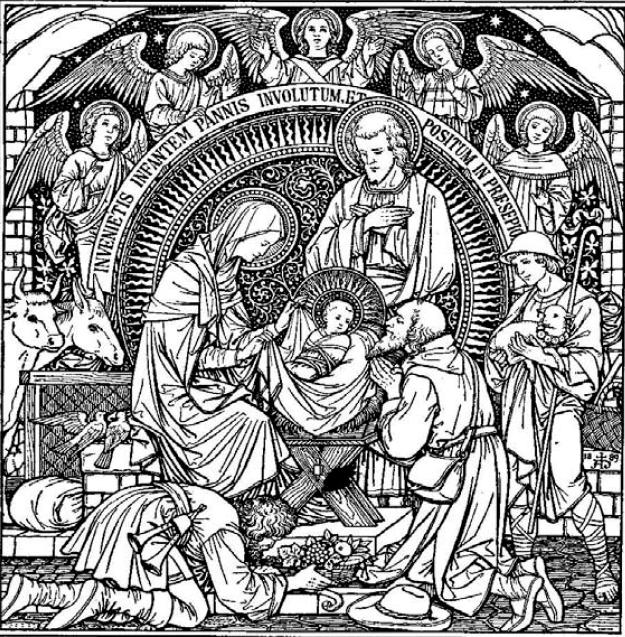 From a Christmas Homily by Saint Augustine

That day is called the birthday of the Lord on which the Wisdom of God manifested Himself as a speechless Child and the Word of God wordlessly uttered the sound of a human voice. His divinity, although hidden, was revealed by heavenly witness to the Magi and was announced to the shepherds by angelic voices. With yearly ceremony, therefore, we celebrate this day which saw the fulfillment of the prophecy: “Truth is sprung out of the earth: and justice hath looked down from heaven. ”Truth, eternally existing in the bosom of the Father, has sprung from the earth so that He might exist also in the bosom of a mother. Truth, holding the world in place, has sprung from the earth so that He might be carried in the hands of a woman. Truth, incorruptibly nourishing the happiness of the angels, has sprung from the earth in order to be fed by human milk. Truth, whom the heavens cannot contain, has sprung from the earth so that He might be placed in a manger.
For whose benefit did such unparalleled greatness come in such lowliness? Certainly for no personal advantage, but definitely for our great good, if only we believe. Arouse yourself, O man; for you God has become man. “Awake, sleeper, and arise from among the dead, and Christ will enlighten thee. ”For you, I repeat, God has become man. If He had not thus been born in time, you would have been dead for all eternity. Never would you have been freed from sinful flesh, if He had not taken upon Himself the likeness of sinful flesh. Everlasting misery would have engulfed you, if He had not taken this merciful form. You would not have been restored to life, had He not submitted to your death; you would have fallen, had He not succored you; you would have perished, had He not come.

A most blessed Christmas to all of you from us here at Sacred Heart Cathedral! May you and your families be blessed by the Infant Jesus this holy season.
Bishop James Wall
Father Mitchell Brown
Father Cornelius Okere
Deacon Randy Copeland
Deacon Ed Schaub
Sacred Heart Cathedral Staff

This week’s FORMED.org recommended video(s):
-The Story of the Nativity: The Truth of Christmas
-Adventus